I have no problem doing things alone, but I do have a problem with being judged about it. I don’t need eight years of therapy school to tell me that this is irrational. Sure, people probably won’t even notice that I’m alone, and sure, doing things alone doesn’t mean someone has no friends, and of course it shouldn’t matter even if a complete stranger did believe that of me. And it doesn’t. It doesn’t matter in the slightest. Unless that stranger is giving me a funny look.

What would my life be like if I weren’t acting on these beliefs? For starters, not worrying about what other people think about me would give me plenty of time to finish my fake screenplay. I would probably then celebrate my fake success by eating in actual nice restaurants, so fake rich and famous that I wouldn’t care what people thought of me being there alone.

What can you do when you have beliefs like these that you know are irrational? An intellectual argument with yourself can’t change that gut feeling that you are being judged, or the anxiety and embarrassment you feel as a result of it. Those feelings are coming from a different part of the brain, the automatic, protective part. The part that can save your life before you even know you’re in danger. The part that can also make you do stupid, stupid things.

This part of the brain does not respond to logic. Fortunately, it does respond to experience. This is why CBT has a B. The behaviour part. Sometimes this means doing something that makes you feel uncomfortable (but that you suspect will not be quite as bad as you have imagined it will be). Once you’ve experienced it to be not a complete disaster, then your beliefs will shift and you will be more likely to do it again in the future. Unless, of course, it turns out to be a complete disaster.

I routinely ask my clients to take that risk – to go against their gut and see what happens. It seems only fair that I should find out what that feels like. 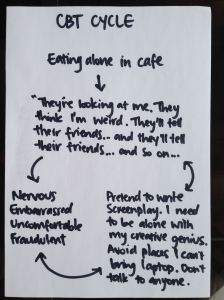 I set the following rules for myself: I would go to a nice restaurant, at night, and make it obvious that I was completely alone. No distractions, no entertainment. No screenplay, real or imagined.

The staff will show their contempt for a lone diner by offering me the perfect combination of being hidden in a corner, while still visible enough to be noticed, stared at and judged by other people.

They seated me in the middle of the restaurant at a communal table, almost as if I had rights equal to those of all the happy couples surrounding me. I actually asked the hosts if they had a policy for lone diners, and they said that most people who come alone choose to sit up at the bar and chat with the bartenders, but that they wouldn’t refuse a table-for-two for one. They got lucky with me: I only took up one place setting but I ordered for two.

Without having to consult anyone else on whether we were doing starters, or who was sharing what, or whether we really need dessert and cheese, I ordered the hell out of that meal. I asked for recommendations and wine matching, and my chattiness paid off when my post-dessert cheese board arrived with AN EXTRA SERVE OF CHEESE FOR FREE. Pity comes in many forms, and the best of these is definitely cheese.

I was surrounded by people on a communal table. In the absence of my usual distractions, I managed to keep myself busy by trying to figure out how not to appear mind-numbingly bored. I’m pretty sure that the iPhone was invented during a five course meal for one.

I watched the couple opposite me, bracing myself for the Judging and Disapproving, ready to retaliate with cool indifference to their narrow-minded opinion of me. Any minute now. They were pretty deep in conversation, perhaps they hadn’t noticed me yet. Why weren’t they looking at me? Where were the judging stares? Where were the any kind of stares? How could they be so consumed by their own lives that they hadn’t even registered me, let alone the fact that I was alone. What am I, invisible? What was their problem?

When one of them left the table to use the facilities, I decided to confront the other one: “Excuse me… I know you were having a conversation, but – and this might sound a bit weird – did you happen to notice that I was here alone?”.

“As a matter of fact, we were just talking about that.”

“Did you think it was weird that I was by myself? I’m sort of doing an experiment.”

“No, not weird. I was just saying that I’d never done it, and I was asking my boyfriend if he ever would.”

“Hey, she was just asking if we’d noticed if she was alone.”

“Oh yeah, we were just saying how weird that was.”

“Because we had never done it. Not that it’s weird to do it, right? That’s what we were saying.”

“Yeah, it’s not weird to do it, but we saw you there by yourself and said how we’d not done it before, and she wouldn’t do it but I don’t know why I’ve not done it. I think other people might think it was a bit weird.”

“We didn’t think you were weird.”

“No. Although it’s weird that you asked about it.”

Well, at least I knew I wasn’t invisible.

Two by two, the people around me finished up, leaving me alone with my thoughts and my cheese. The wait staff were perfectly polite (and I didn’t have to resort to my pre-prepared retaliation plan of asking to split the bill). I didn’t have any conclusive answers about what people thought of me, but I had discovered I could cope with it either way. I could have planned out another experiment to gather more evidence, but I decided there was nothing more I could discover that would make it worth my time. After all, I’ve got a fake screenplay to finish.

This site uses Akismet to reduce spam. Learn how your comment data is processed.